During the cold months of January and February we dealt with some inclement weather. In fact, one of our Spay/Neuter clinics had to be cancelled the night before because a storm lasted longer than meteorologists had anticipated. Nonetheless, people still made an effort to bring their pets. Here are the stats for these two months:

At these events neighbors are invited to bring their pets to a booth we set up on the corner. Trained volunteers have a gentle touch and administer treatment for worms, mange, fleas, ticks, and other general care in preparation for an upcoming sterilization event. (Animals must be clean and in relatively good health before being operated on. Spay and neuter are very complex surgical procedures and the animals we serve are either rescued street animals, or are pets that have had deficient diets and life-long flea or tick infestations, and no vaccinations or deworming treatments ever.) As usual, the treatment we offer at these mobile street clinics is free and all pet owners receive a 3 lb bag of dry dog/cat food for each pet they bring. At least the animal will have eaten well prior to his surgery, regaining some stamina.

Since 2006 this has been part of what FHSTJ brings to the poorest neighborhoods of Tijuana where families can barely afford to feed themselves and their animals, much less pay for sterilization and other vet care.

People living here are extremely grateful for all services FHSTJ brings and some will even walk long distances, up and down dirt roads with their animals. This is only made possible thanks to your generous donations.  So the next time you think about the animal problems in Mexico or see something on social media, know that you are making a direct contribution to combat this in a more permanent way: through education and sterilization. Overpopulation compounds the problem.

Our free/low-cost veterinary clinic is also a valuable resource for animal owners living in Tijuana. These services are strictly for families with little means and for individual rescuers (people who refuse to associate themselves with any specific animal rescue organization --but who dedicate their personal time and resources to pick up suffering animals off the streets, provide them veterinary attention, rehabilitate and care for them inside their own homes.)

During January the HSTJ CENTER performed 62 spay/neuter surgeries. 128 people brought their pets/rescues for various other reasons, not related to spay/neuter. [FEBRUARY STATS FOR THE CENTER WILL BE ADDED SHORTLY]

Just to give you an example of some special cases for January and February: The veterinarian performed three emergency cesarean surgeries. Pictured here is a litter of four puppies that were born in January. Boy were they loud puppies! :-)  Today they are growing big and strong. When they are ready, they will be up for adoption.

Another special case was that of this white dog now named Pingo. He was rescued by Salma, an individual rescuer that we support. Salma cared for his wound on the front leg. He was consistently cleaning it, but noticed no improvement in the wound and the dog's health continued to decline. Salma decided to bring Pingo to the HSTJ CENTER. Upon close examination, the vet could clearly see that the leg had gangrene/necrosis and had to be amputated. Pingo has completely recovered and is a very happy dog. He is up for adoption. You can find his full bio/profile on our Petfinder Page. 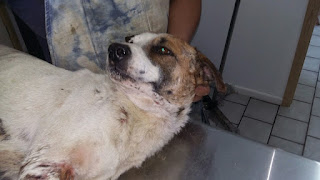 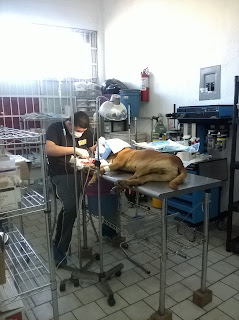 Yet another special case was that of this brown female dog of approximately three years of age. At some point she must have been involved in a fight with another dog, causing her to suffer an injury to her left eye. Being a stray, this remained untreated for many months, possibly over a year. She had lost the eye, and must have suffered a terribly painful infection. When a couple began noticing her on their way to work, they would continue to feed her every morning at the bus stop, gaining her confidence. They tell us that she was very friendly, but her eye area was extremely sensitive and appeared to cause her much pain. They decided to bring her to the HSTJ CENTER for examination and removal of the bad eye. The surgery was a success and this little lady recovered at the CENTER for the first few nights. The couple who rescued her rent a tiny apartment studio and were not allowed to bring her inside. They made her a small living quarters outside of their building. We are seeking a foster home for her on the U.S. side. If you know of someone looking to foster, please share her story with them. Thank you.

MONTHLY STERILIZATION CAMPAIGN
In January there was one event, sterilizing 15 animals. In February there were two events, sterilizing a total of 51 animals. These are cold months and it is important that pet owners can guarantee that the cat or dog will remain indoors after the surgery for at least the first few nights. Many people are not able to do this so they are asked to wait until the weather was a bit warmer. Please stay tuned for all the programmed activities during the upcoming months. As the weather gets warmer the flea and tick problems become severe, especially in the rural communities..
Posted by Friends of Humane Society de Tijuana at 10:18 AM 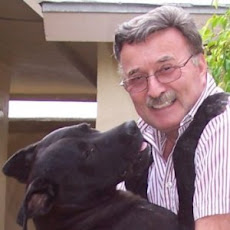 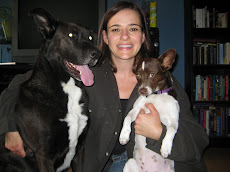 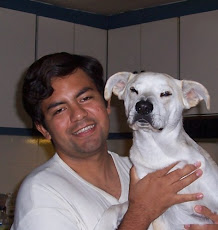